Duffle coat is an English classical single-breasted coat of the three quarter length that has been produced since 1890. Its distinctive features are: a hood, an original fastener on four large wooden or bone buttons with loops from leather or textile cord, which makes doing and undoing a coat with gloves on convenient. Another feature is a tartan lining and side deep square patch pockets with flaps. Such coat is sewed from the fabric “duffle” that is from the Belgian town of Duffel. The same fabric was initially used for bags. The duffle coat is as popular in the twenty first century as it was in the nineteenth century both among men and women. The very first duffle coats were only for men and only some time later women started to wear them.

A duffle coat and ladies

In the 1950s when the famous fashion designers made changes and showed the beauty of the duffle coat, it became popular not only among men but among women too. It isn’t surprising, because the duffle coat gives special feelings of a cosiness and warmth with the combined with an exclusive design.

The elements that were created for men can perfectly suit a woman and highlight her fragility and feminity.

If you are in the real English duffle coat, you shouldn't be afraid to go outside because you will look beautiful and elegant in it. Despite the fact that the duffle coat is considered to be the most nonclassical of the classical English coats, it has preserved the purely English origin. That's why the duffle coat looks great and highlights your female image. 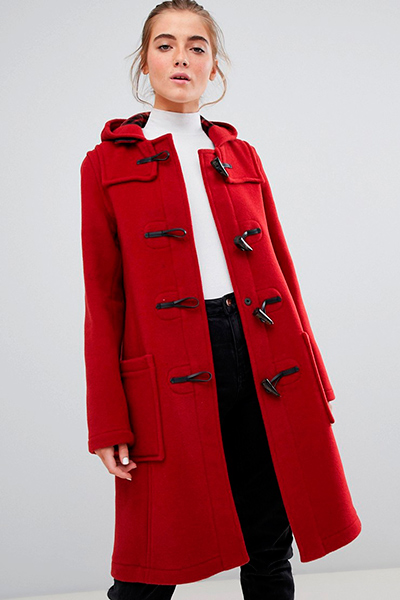 Distinctive features of the women's variants of the duffle coat

Women’s models of the duffle coat don't differ from the men's ones. There are the same classical voluminous hood, original fasteners in the form of walrus tusks, rectangular patch pockets. The length of the coat can vary, it will be shorter, as many women prefer short coats. Moreover, the bright colours prevail in the women’s models of the duffle coat as traditional "camel" colour is more often seen in the men's duffle coats.

More articles:
What are they made from? Duffle coats then and now
Combining a duffle coat with women’s headwear: what is and what isn’t allowed
London Tradition: the past and the present

The duffle coat perfectly matches a classical shirt and a knitted sweater, and also a soft scarf. You can also combine a duffle coat with a classical women's suit and shoes, even high heel shoes. In the end it turns out that internal strict filling is smoothed out by the soft lines of the duffle coat that brings a woman this special charm and tenderness.