How was the duffle coat created?

How was the duffle coat created?

A Duffle Coat is a warm short coat made of coarse thick woolen fabric with a hood and a patch yoke. The main design element distinguishing this coat from other types of outerwear is the original wooden or horn buttons made in the form of extended sticks.

The home of this popular model is the Belgian town of Duffel, which became famous in Europe in the 17th century owing to the production of camel wool of the same name. Local residents sold warm fabric and made clothes for fishermen. Long coats with a neck fastening and a loose hood under which a peak-cap was put on, perfectly protected seamen from cold wind, rain and sleet.

A duffle coat as a military outfit

In the middle of the 19th century John Partridge, a British tailor, made the first samples of a men’s duffle coat. The experiment was a success, and soon woolen fabric with 'fleece' was taken to make a uniform for British sailors.

Practicality and wear resistance of fabric were perfect. Besides, fashion designers chose an advantageous style: the garment didn't restrict movements at all; it was thick (but not too heavy to cause discomfort) and very warm.

British sailors in duffle coats during the war

The English ships called practically all ports of the world where seamen roamed the streets, drawing attention of passersby’s attention to a new unusual outfit.

But the real popularity of these clothes was brought by field marshal Bernard Law Montgomery whose branded attire was a baggy short coat with a hood and a beret, slightly shifted on one side.

Perhaps, this rather simple and democratic style wouldn’t have gained such wide recognition if it hadn't been the favourite outfit of the political figure. Owing to the field marshal the duffle coat had also been called a “monty” coat for a long time.

The exquisite and at the same time vanguard French couturier Yves Saint Laurent always paid attention to military uniform and borrowed some details of the attire to create everlasting brands. In the 1960s the fashion designer offered his own version of men's clothes, having added a little capital chic to the duffle coat. 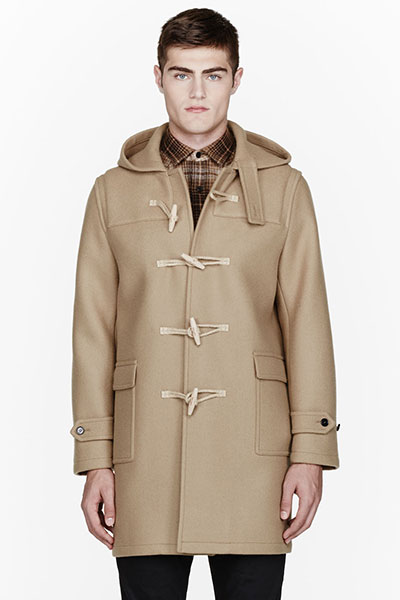 He added leather loops for fasteners ("tasks"), an oversized hood and a long straight silhouette. Today a duffle coat is considered to be an outfit for a modern, intellectual, emotional person, moderately negligent regarding clothes.

The cut of the duffle coat

A duffle coat is a single-breasted coat (of coffee, olive, brown, grey or black colour) with a hood clasped on the neck. There are bone or wooden toggles (the shape is called “a walrus task”) which are fastened with leather or rope loops.

The fabric is wool with pile; there are two rectangular patch pockets with flaps on each side. This is a classic duffle coat presented to us by Yves Saint Laurent.

Later other variations of the duffle coat were produced, but these were completely different models, although they maintained the British-French brand continuity.