Why does duffle coat stay popular?

Why does duffle coat stay popular?

With course of time military clothes has become more popular with civilians. It is common to meet in the street a young man or even a girl in army boots or a military-style suit. This trend affected single-breasted overcoats for British navy sailors.

Today duffle coats are seen more often on passers-by, ordinary city dwellers. But why has a common woolen jacket become so popular?

A traditional duffle coat was made from camel wool which accounted for its functionality.

Nowadays such models are made from various natural fabrics with synthetic fiber blend that enhance quality wearing and extend duffle coat’s durability.

Alongside the usual toggle fasteners, modern jackets are also furnished with a zipper and the Scottish tartan is completed with a fur lining. It will keep you warm even in bitter cold.

Look with a men’s duffle coat in camel colour

Simple fashion and absence of excessive details make it possible to wear a duffle coat with almost any clothes. Certainly, a knitted sweater will be a perfect match for such an overcoat — and in such a way they were worn by the British sailors. However, even if you put on such an overcoat on a classic suit, your look will be interesting and appropriate. In addition, fashion historians claim that a duffle coat should be worn not with the usual sneakers, but with rubber boots: it is far closer to the original style. 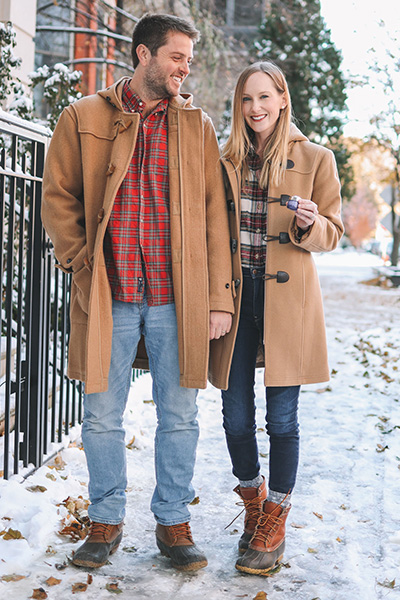 Capacious pockets of the model save the owner the necessity of deciding where to put a mobile phone, a note book or an e-book reader, keys and other small objects.

It can be boldly stated that a duffle coat will never be out of fashion. Yes, it won’t always be the hottest trend, but will fit in perfectly with the modern ones. It’s all due to almost straight cut of the overcoat and minimum accessories. Such a model will become a treasure for the supporter of almost any style.

Models for all genders and ages

The first women’s duffle coat appeared not that long ago, but during this period has already become a favorite with the fair sex. Especially for them clothes manufacturers made some changes in the fashion. The cut became more fitted which enhances the figure. Certain models got almost invisible slashed pockets. Also, a classic overcoat acquired more decorative elements. 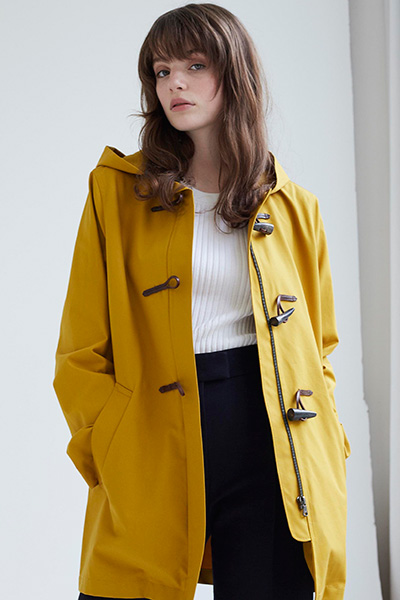 Gloverall duffle coat from the spring collection
More articles:
On Queen's Service — duffle coats in wartime
The Original Montgomery duffle coat: a fashion echo of the past
Types of the duffle coats

A duffle coat is a universal piece of clothing that apart from looking excellent has outstanding functionality. It explains the popularity of the overcoat among the modern fashion followers.